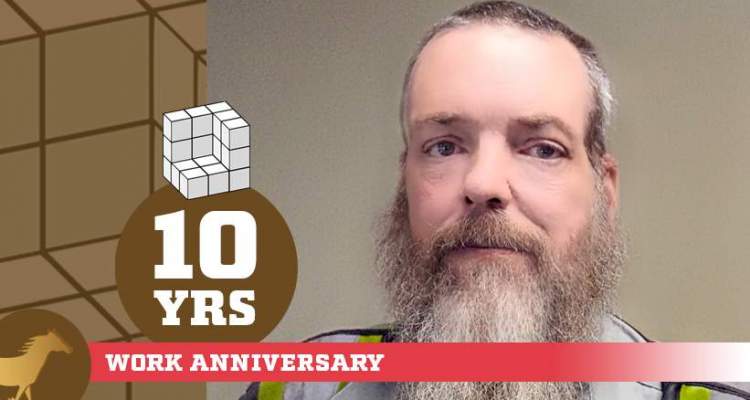 Mustang Freightways proudly celebrates Jim Pitman’s recent 10-year work anniversary with us! Jim is one of our fabulous forklift operators based out of our Calgary freight service center, where he loads and unloads inbound and outbound trailers.

Best of Both Worlds

Talking about his role at Mustang, Jim says one thing he loves is his shift time, stating that he gets to experience the best of two worlds because of it. “I work the split shift, so I get the best of both AM and PM shifts – helping to unload and load trailers,” he says. “By helping to load the early outbound trailers, we make it easier for the PM team to focus on loading other trailers that will arrive later,” he explains further.

Jim is a gamer and views his work like one of his favourite games, Tetris. “I like the work I do; it changes daily, and racking and loading freight is like a game of Tetris to me… it’s rewarding when done well,” he says.

He talks about the customers he has had the pleasure of working with over the last 10 years and how much he appreciates them. “I’ve been loading freight for many great customers, some of them since day one, and they’ve all been incredible. I guess I’m celebrating this anniversary with them too!” he exclaims.

Speaking on his 10 years at Mustang Freightways, Jim says he’s grateful for colleagues who have turned into his work family. “I like the people I work with, they’re great! We treat each other like family,” he says. “Most of my colleagues have been on the team since I started, so I’ve gotten to know them on a personal level; it makes our work even better,” he happily elaborates.

The Chef, the Collector

Jim was born in the Maritimes and was a chef before he moved to Alberta to start a new life. “I used to work as a chef before moving to Alberta in 2000,” he recalls. “I’m grateful for the life I have created here with friends and families. These past ten years with Mustang have been thoroughly enjoyable for me,” he adds.

Jim also loves to collect things, from comics to video games; it’s one of his favourite hobbies. “I consider myself a collector; I love to collect items – comics, hockey memorabilia, and Funko Pop figures,” he says. “I am also an avid connoisseur of all things video games. From the original NES (Nintendo) to PlayStation 4, I have a large collection of games across different console generations,” he concludes.

Congratulations on levelling up to the next level with your 10th work anniversary Jim! Glad you’re part of the family… you’ll always be at the top of our ‘highest scores’ list!

Start planning now for all your 2023 freight shipments! New for 2023, Mustang Freightways has…

As we settle into 2023, many of us are looking for ways to improve our…

As a trucking company, our drivers and equipment are the faces of Mustang Freighways, as…